When I was three years old, a film-school graduate made a documentary about my parents’ shared German-Tibetan life story and about our family life in Berlin and Tibet. These analogue shots, hyperreal memories of a time when my consciousness was just taking shape, have now taken on an artificial intensity: they resemble retro-style advertising clips designed to trigger nostalgic feelings that stimulate our purchasing power. Only this isn’t a commercial, it’s a look at my life.

In my work, I try to capture the longing triggered by images from a bygone era. “Nostalgia” is one of my key terms in this context. According to Milan Kundera, it is the suffering caused by an unfulfilled desire to return to something past. Return in Greek is called nostos. Algos means suffering. Nostalgics often romanticize past times and the way certain places were, while the present seems foreign to them. I chose Wilmersdorfer Strasse, a pedestrian zone in Berlin Charlottenburg, as the setting; Tibet, the film’s second location and my father’s home, is ultimately inaccessible to me. Wilmersdorfer Strasse was the first point of contact with Germany and German society for my father, Ngawang Gelek. There, he would pray in public, reenacting his memories of a past life in India and Tibet. He saw Wilmersdorfer Strasse through the prism of his diasporic experience of flight; for him, the street was a place to recreate the identity he had left behind.

Praying and begging is part of everyday life for the Buddhist monks and nuns of Tibetan monasteries in India and Tibet. In Berlin, however, on a shopping street, in a commercialized public space, it may not necessarily be a welcome departure from the usual environment. Fellow students often asked me why my father had to beg. Once people called the police, who violently arrested Gelek, threatened him, made racist insults, and put him in a cell. With that event, this place changed for me.2 It also became a constant reminder of the classism and racism rampant throughout German society and its security agencies.
For me, stepping onto Wilmersdorfer Strasse means returning, going through the stations of my father’s integration—up to today, when he no longer needs to sit there. And despite our traumatic experiences there, I feel gripped by something that’s probably best described by the word “nostalgia.”
I use the analog footage from the aforementioned documentary and mix it with actual footage of the shopping street to visualise my memories in the present. There is also a narrator’s voice that associatively links the images with my thoughts about my childhood.

Newspaper articles and other reports about my father can be found via the following links. 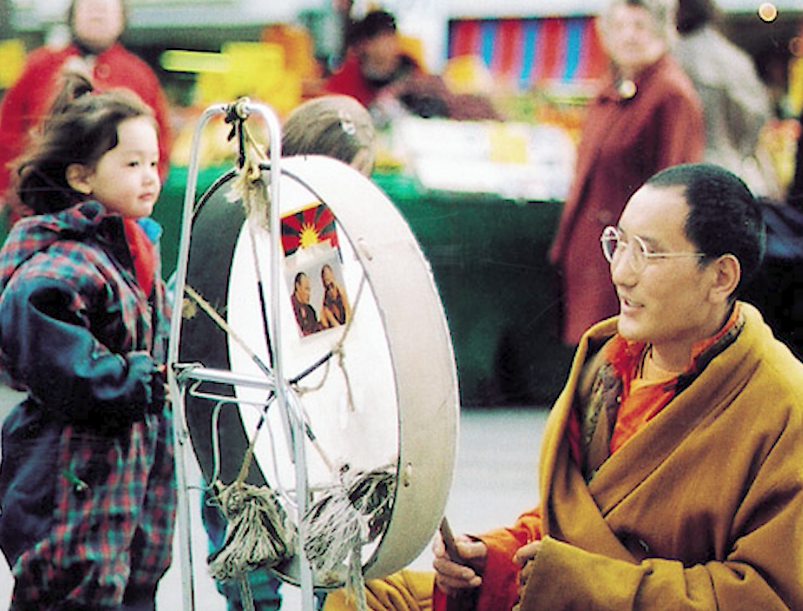 English translation of the German transcription

For me, stepping onto Wilmersdorfer means returning. Back to a time when the center of my world is here, where my dad is sitting and praying.
A bygone childhood, a time when there is still Drospa and no dm yet. Everything is so simple: mom goes shopping with the stroller; dad prays and laughs. We go shopping at Pimkie, dad sits and prays.
He’s a good man. I’m sure he’s got another tenner for me.
Still, I’m also a little ashamed.
2021—my father isn’t there anymore.
He’s glad to have a “normal” job and I’m nostalgic, like I’m the old woman now.